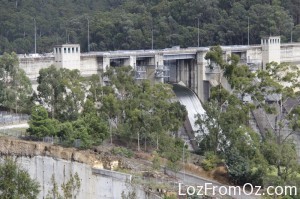 Sunday – today, as the flood waters rise in New South Wales and the excess continues to spill over Warragamba Dam – my son Stuart, grandson Mitchell and I went for a drive to see the thunderous torrent as it has been portrayed by TV stations of late.  Recalling memories of my previous visits to Warragamba I was all excited to revisit those sights and take more photos to add to the ever growing collection.

But before we get to today’s events let me take you back to 1961 when the dam was still under construction.  I was in sixth class or (grade 6 as they call it nowadays) and our class went on an excursion or to use today’s terminology ‘a field trip’.  Our uniformed class piled onto the bus along with two teachers – Miss McFadyen and Miss Caldbeck – both of whom were suitably attired in Summer dresses.  I cannot remember how long it took to get there – I would think in those days about 2-3 hours but then again there wasn’t as much traffic as there is today so maybe it was less, anyway it is not an integral part of this story.

Arriving at the dam and with my dad’s trusty Kodak box brownie loaded with black and white film in hand I commence to photograph this event of my school days for posterity.  Photo on the right is of the unfinished dam – the roadway along the top is still to be constructed.

Checking with my good friend Wikipedia it says that the dam was finished in 1960.  Well the actual dam may have been finished but this is what it looked like in 1961.

A highlight of the day was that we could actually walk across a suspension bridge which had been strung up between both sides of the river.  I was most careful not to drop the camera – in those days there was no neck or wrist strap, just the good old ten fingers in a white knuckle grasp. 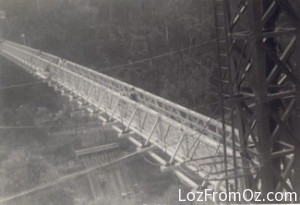 My dad would have killed me if the camera became a permanent fixture at the bottom of the gorge!  Even then I had straight horizons, leading lines and comparative sizing.

From what I remember it was a very hot day but the excitement of the dam and the terror of walking along the swaying bridge was something I will never forget. You can even see some on my schoolmates enjoying the stroll. Even as this early age I was practising to get some great shots.

Moving along to 1975 – another little outing is planned which will include a visit to Warragamba.  The dam is now completed and we are lucky enough to find it has a major spill due to rising waters further upstream –  and you can now drive across the top.  From memory there was a presentation area where you can see the history of the dam and learn all about the construction.

A picnic lunch under the shady trees while you see and listen to the gushing water flowing down the river – this is in a time pre 9/11 where a simple day’s outing was just that and everyone could enjoy nature and man made constructions working together.  Sad that those times seem to be disappearing. 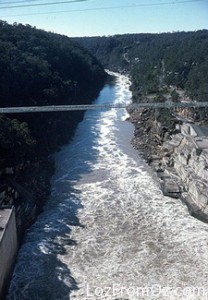 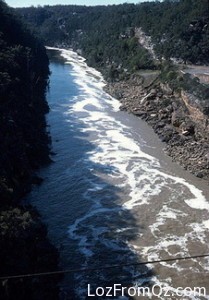 This time it’s concentration on the photos and more like a leisurely stroll across the bridge, although I am still gripping the railings like the mad dash back in ‘61.  Another glorious day with warm sun and blue skies. You can even stand on the top of the dam.

Now we move along the time line to today – 4th March 2012.  As I said previously, another day to see the dam in flood and after a 90 minute drive we arrive to find there are tourists everywhere.  Apparently you can no longer drive over the dam and parking is extremely limited but we finally park the 4 wheel drive half way up a footpath and into the overhanging branches of a tree and then commence our long walk to the ‘viewing area’.  Roads are blocked off – there are hundreds of people but at least there seems to be just as many leaving as what there are arriving.  This will become clear – read on.  More rain is predicted but at the moment it is dry but unfortunately the humidity is pushing 100!

After a 10 minute trek the viewing area is reached – hold it – – did I say viewing area? It should have been named the ‘partial viewing area’.

What a disappointment!  We still see the water gushing over the spillway but now we are about 500 metres away from the dam face and there are trees everywhere. 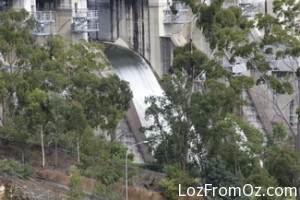 The viewing area is about 30 metres long and everyone is juggling for a better viewing spot.  This is the best to be had where there is just a glimpse of the water – thanks to my zoom – but nothing as dramatic as in previous years.

You cannot see the river at the bottom of the gorge so the falling effect has no effect.  The suspension bridge has long gone – burnt out in the bushfires years back – never to be replaced and people have their trusty tripods and mega zoom lens cameras – a la National Geographic

Is it my imagination but does the spillway opening today look bigger than the one in 1975?  There doesn’t seem to be anyway that you can get closer even though there is another ‘viewing’ platform about a further 4km drive up towards the dam itself but it doesn’t look to be any better – just higher – so after about 10 minutes we decide to call it quits and head on back to the car and home and leave the NatGeo photographers to their assignments.

There are still lots of people arriving but not too many smiles on the ones leaving.  There is also a coffee truck just where the entrance gate is – now if they had cold drinks it would have been better.

Getting back to the car – covered in sweat and perspiration – we head for a Maccas lunch and icy cold drinks!