As you can gather this is not really Day 12 – it is just the left over bits and pieces that I remembered but couldn’t figure out where they went.

We laughed and laughed so hard at times we ached and nearly made ourselves sick – we sat in silence and it felt like we were the only ones in the world so here a few more treasured memories to share with you. 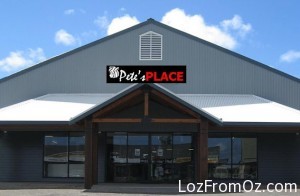 ***** The constant ads on TV about Pete’s Place which provided more mirth and merriment to us.  This place is constantly referred to as Aladdin’s Cave and is very deceiving as it is filled with treasurers from everywhere – and all at bargain prices.

The ad starred a family whose lives revolved around catching, preparing and cooking everything from pippies or whelks or whatever that they had harvested on the shores around the island.  This gang would leave Hollywood for dead and were definitely deserving of an Oscar nomination for the performances.

***** Lunch at Daa Nursery.  This is a plant nursery that I deal with where I work at home.  They purchase the seed for the plants and hey presto – what plants they don’t sell they grow and then use the produce in the restaurant.  You can either eat inside the large area or outside under the big umbrellas which we did.  Brilliant.  It is these people here that introduced us to ‘Sex on the Beach’.  Now don’t get too excited – it’s a drink based on coconut, with rum or tequila or vodka – something alcoholic. It is delicious.  A bit like a very, very strong Coconut, lime, pineapple smoothy with a shot of alcohol thrown in for good measure.  Yum – our downfall on more than one occasion. 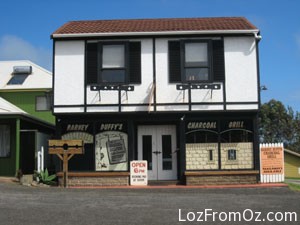 ***** Dinner at Barney Duffy’s.  This is a mouth-watering Charcoal Grill that serves steaks of your choice and local fish meals.   It is situated in town and when you want to make reservation you pick a date and time and write it in the book out the front!

The place is named after Barney Duffy who was one of the convicts who lived a miserable existence on the island in 1790.  He escaped and evaded his captors for seven years.  He was struck off the register as it was thought he had died falling over one of the cliffs.  One day two young soldiers decided to fish off the treacherous rocks at Headstone and came upon him.

They moved to take him and he cursed them with cries of ‘Take me or report me ye red-coated lily-livered lice – aye, and then I’ll hang but hear ye me curse on ye! So surely as ye do this thing before me corpse has hung a week on Kingston Gallows ye’ll meet a violent death, the pair o’ye. So think twice, me brave young buckos or ye’ll remember these words when your time comes.’  To cut a long story short – they captured him and two days after Barney Duffy stood trial and was hanged, they were swept off the rocks by a freak wave and drowned. A third man who was with them survived.

But I digress – our dinner of steak with huge baked potatoes, sour cream, chives and vegetables was enough to feed poor old Barney for a year.  They also have tender juicy ribs – and after enjoying our meal we are lucky to be able to get up let alone waddle to the car.

***** A night of Trivial Pursuit.  This game was played one night during a few, no many bottles of liquid refreshment.  It ended in hilarity for all – and even when I was given the hints and the answers I still couldn’t get it right. 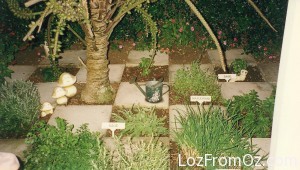 ***** The Progressive Dinner.   This is where everyone gets on a little bus and eats their way around the island.  The first course of canapes and party starters was had at a very charming house that was built out of native timbers.

The entree of local fish fried to perfection at another that had a fabulous herb garden (see photo left), the main at another and dessert at another.  It was a lovely night except for the buggers who tried to steal all the white wine from our end of the table – they did not succeed I am glad to say.

There was also a mother and daughter (we called them something else) who at the house of the dessert wandered around looking at everything even the owners bedroom – the owner being a single man who was a chef!  I will say no more as you can get the drift.  Maybe mum was trying to marry off the daughter – who knows – and really who cares.  It gave us three a real good laugh.

This holiday was truly a gem.  Such good medicine for people who are in desperate need of a good time – albeit a quiet one – it refreshed us and gave us a sense of the good life.  I was so lucky to have two such wonderful travelling companions.

We went to Kingston just about every day which made us dissolve into gales of laughter.

We laughed in restaurants, in the spa drowning in bubbles and in bed of a night time listening to the cows, chooks and IT3 cursing the lot of them.

Take my advice and experience it for yourself – you will have a ball!  But first up make sure you have some wonderful friends who have a great sense of humour.