At the Delphi House of Ancient Artefacts – – 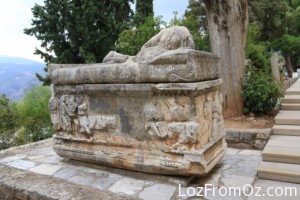 I thought if I said the ‘M’ word again, you may immediately explode.  But you have to remember that this is Greece with thousands of years of history and we are here to discover as much as we can.

At the entrance to the ‘M’ is a display and information on the cemeteries of Delphi.  This sarcophagus was part of a family funerary monument located at the east of the sanctuary of Athena Pronaia.  It is dated to the 2nd century AD. A female figure reclining on the lid probably depicts the deceased. 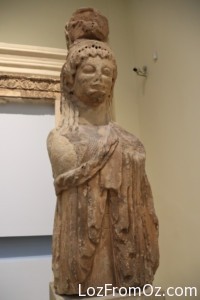 The Siphnian Treasury was the most extravagantly adorned of all the Delphic treasuries in the sanctuary of Apollo, built in the new Ionic architectural order, and luckily, the best surviving.

The historian Herodotus describes Siphnos as the wealthiest Greek island at precisely the date of construction, thanks to its gold and silver mines. Right is a Caryatid from the Treasury of Siphnians 525 BCE.

The scene depicted on the East Pediment is the dispute between Herakles and Apollo, after Herakles had sought advice from the Delphic oracle but ended up grappling with the god, having seized the priestess’s tripod.

The East Frieze detail represents the battle of Troy.

There are so many photos of this but I must press on – so much to see – so little time and I really do not want to do yet another post to finish my visit to Delphi.

Below left is the Sphinx of Naxos – 6th c BC. He is depicted sitting on an Ionic column about 10m tall.  The people of the Island of Naxos gave this sphinx to the Oracle of Delphi.

Below centre is a pair of identical marble kouros, Possibly depicting two heroes from argive (resident of Argos) mythology. They are the oldest monumental votive offerings at Delphi, and one of the earliest examples of monumental archaic sculpture. Early 6th c. B.C. (circa 580 B.C.) Over life size (6.15m) each. Made by Polymedes of Argos. 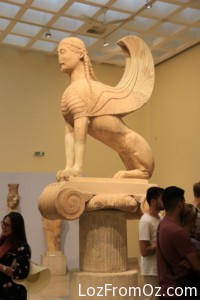 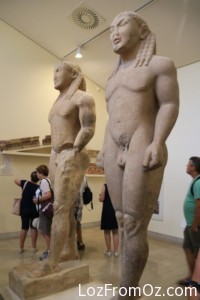 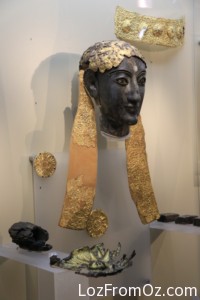 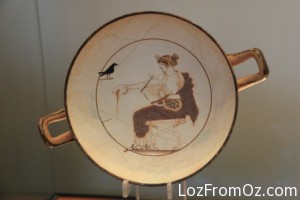 Is this not beautiful? So delicately drawn. Found in a tomb at Delphi, it is a white kylix with a drawing of Apollo 480-470 BCE. Used for drinking wine at a male drinking party, the scene would only be revealed once the cup had been drained.

The god is crowned with a myrtle wreath and is seated on a lion-footed stool. He is holding his lyre and pours libations from a phiale, while a crow or a raven watches from a perch. The bird recalls his mythical love for the beautiful Aigle-Koroni, the daughter of King Phegyas.

Below left is the marble Omphalos of the Earth.  This sacred object was located in the Adyton of the Temple of Apollo, and was viewed only by the priests and priestess who had access to the chamber. It was originally placed on the top of the Column of the Dancers – below centre. 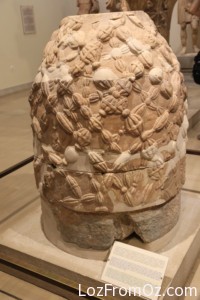 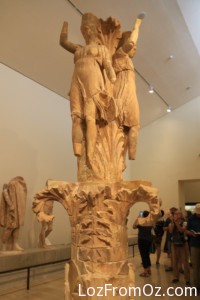 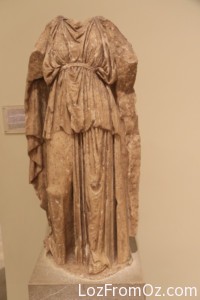 The column of the Dancers is carved from Pentelic Marble and features three young women forming the upper part of a column encircled with acanthus leaves. The figures all wear a short, transparent chiton and bear a basket on their heads. It is believed to have supported a tripod of the type the Phythia used as she went into her trances. The girls are thought to be celebrating the god of wine and good times – Dionysis – who also resided in the sanctuary.

Far right is Apollo wearing a long chiton and peplos whilst a cloak is draped over his shoulders.  He held a cithara – an ancient musical instrument something like a lute in this right hand and the plectrum in his left. How they know this is beyond me! Early Hellenistic period, 3rd century BC. 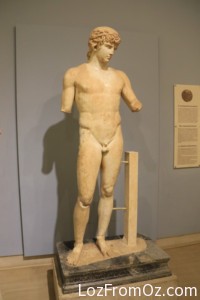 Here is another acquaintance – Antinous. Hopefully you remember who he was, but for those who don’t – he was a young Greek of extraordinary beauty from Bithynia, who became the beloved companion or lover of the Roman Emperor Hadrian.  He later died in the river Nile under mysterious circumstances.

One of the most beautiful statues at Delphi it was found very well preserved and still shining thanks to the special oil used to polish the ‘skin’ of marble statues.  The head is tilted to the side like he is in a state of reflection and the thick and masterfully carved hair, which surrounds his face and falls on the forehead and cheeks adds a mournful quality to its beautiful, vain youthful figure.  There are several holes that were used to attach a bronze laurel wreath. His body is carved in a way that gives it that beautiful nudity which characterized the statues of gods and heroes of classical antiquity. 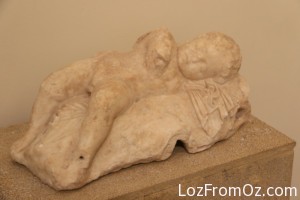 This tiny Eros has fallen asleep on a rock.  Dated early 2nd century BC, it was part of a sculptured decoration of a fountain.  It seems to go un-noticed by a lot of tourists and their guides, so I can just stand by and watch the little god enjoy some down time.

Next is the culmination of my journey through the museum –

It is considered a fine example of the “Severe” style. 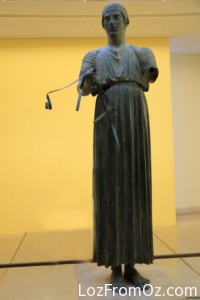 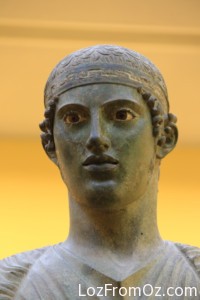 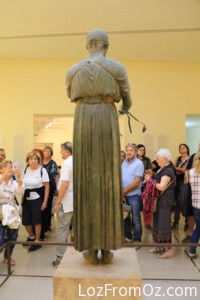 The sculpture depicts the driver of the chariot race at the moment when he presents his chariot and horses to the spectators in recognition of his victory. Despite the severity of the moment, the youth’s demeanor encapsulates the moment of glory, and the recognition of his eternal athletic and moral stature with abundant humility.

So many tour groups – but they keep moving – not much time to really look and appreciate what they are seeing. I take my time – the one dayers can wait for me for a change.

Heading back to the bus – I am given a look of hurry up – not even time to visit the shop to get a magnet – have to make sure we are on time to get the one dayers back to Athens – bummer I hate these type of tours.

Arriving at the Delphi Amalia Hotel – it is way out of town but great views and also a wonderful pool.  Room is tiny and so is the bathroom.

Time for dinner and an evening of downloading photos and relaxation. 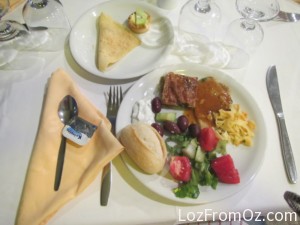 Dinner consists of the usual suspects plus some really good desserts.

Tomorrow we are off to Meteora –