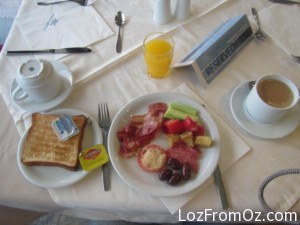 A good nights sleep – thanks to all the walking yesterday – and now it’s time for breakfast. Seems to be the same as the Amalia Athens food served at this time.  As long as it is tasty, hot and filling then who am I to complain.

Today is day 2 of our 3 day excursion.  It says in the itinerary – Your morning is at leisure. Take the opportunity to shop for local handicrafts. Depart for Kalambaka via Lamia and villages of Central Greece.Overnight Kalambaka.

The best laid plans – well – you know what happened to them.  Shopping is out of the question as the hotel is too far from the town to walk.  You can get a local bus but that proved to be a disaster for two in our group as the bus was late returning to the hotel and they were still not back when we were scheduled to leave, so plans were made that they would have to get a taxi to our lunch stop.  Well, that’s a bummer for sure.  I am sure they would have to pick up the bill for that little jaunt. 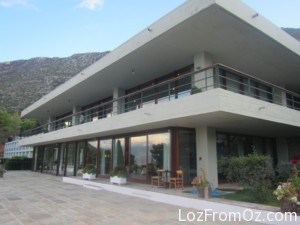 Above is the exterior of the hotel and on the right is the spacious lounge just around from the Reception area.  Lots of space, lots of comfy lounges and lots of power outlets to charge everything that needs charging.  It is so peaceful but soon it is time to board the bus – minus the no shows and we are on our way to Meteora.

Tomorrow we were to visit the Memorial at Thermopylae but the guide has decided to do this today after lunch.  Speaking of which, we stop at a really quaint restaurant – it has the feeling of being a family run business that caters for bus tours to keep their profits going.  I order a Greek Salad and some Spinach Pie. How great does that look? 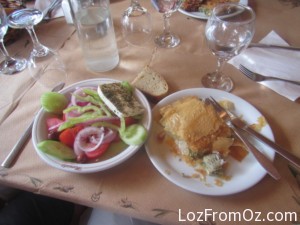 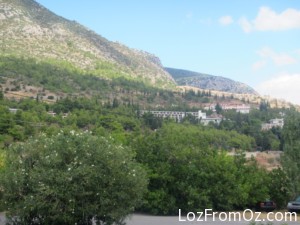 It was so fresh and so delicious and so filling that after lunch it is time for a walk around before sitting on the bus again.  The views are great and there is a pomegranate tree in the grounds that provides a bit of humour.  ‘What is it?’ turns out to be the catch phrase and one of the ladies on the tour starts to pick a couple and break them open to show the others what they are like inside.

I am sure the restaurant owners would be overjoyed if they knew what was going on.  I move right away and pretend I don’t know any of them.

All aboard and we are on our way to the memorial of Leonidas at Thermopylae.

This is also known by Hollywood and sundry as ‘this is where the Battle of the 300 took place’.  If you are interested in watching the history unfold on DVD – then get the History Chanel version –  Last Stand of the 300 – not the Hollywood one.

In 480 BC in this very place, a most astonishing and unequal battle took place between a few Greeks and a million Persians.  Three hundred Spartans and seven hundred Thespians under the orders of Leonidas, King of Sparta, decided to fight and either win or die defending the freedom of their country. 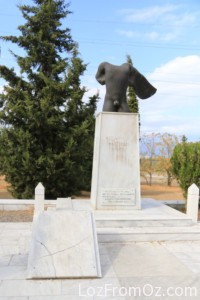 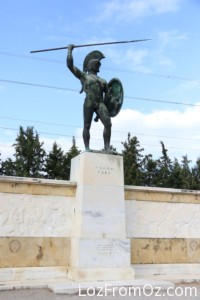 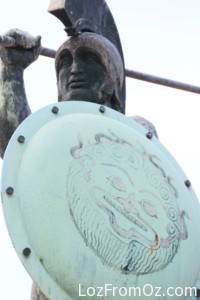 Above left is the monument dedicated to the 700 Thespians – centre and right is Leonidas.

According to the historian Herodotus, the Persian army consisted of about one million seven hundred thousand soldiers who were under the command of King Xerxes.  The Persians asked the defenders to surrender their weapons but Leonidas replied to them with the heroic phrase ‘Come and get them’.  This phrase has become a bright example for the generations to come.

‘Of those who died at Thermopylae renowned is the fortune, noble the fate.  Their grave’s an altar, their memorial our mourning, their fate our praise.  Such a shroud neither decay no all-conquering destroy.  This sepulchre of brave men has taken the high renown of Hellas for its fellow occupant, as witness Leonidas, Sparta’s King, who left behind a great memorial of valour, everlasting renown’.

There are lots of tour groups here and most of the photography brigade are very understanding so I am lucky enough to get these photos – and yes, by the time I read the plaques I was a bit late for the bus – along with about ten others.

Time to head for The Grand Meteora Hotel – my room is a double and much better than the closet at Delphi and the bathroom is very spacious. 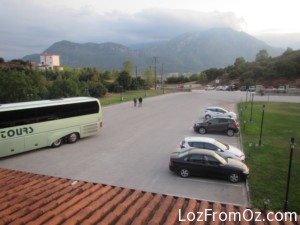 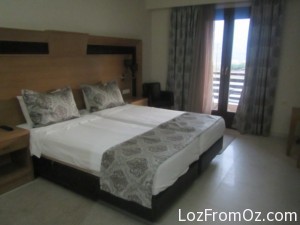 My view is of course – the car park – but a much better class of car park don’t you think?  That is our bus for Go-Tours at the front.  I have my own verandah – so that’s a bonus.

Dinner is in a main dining area and then it’s time to download photos and off to bed.