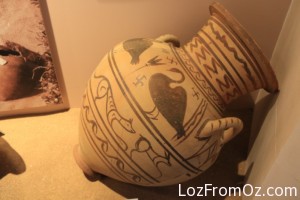 After all that mind boggling Macedon Gold, let’s explore some other items in this wonderful museum. I know you are saying that you have seen enough pottery and statues from previous museums – but ancient Greece has so much to offer – and there will be more amazing treasures to discover as we continue on our journey.  But I digress – –

Above is a vase used in a burial. Dating 8th – early 7th century BC, it is one of the finest examples of local pottery.  The band with birds was a favourite decorative motif.  The scene on the bottom band of a hunting dog chasing a rabbit is unique. 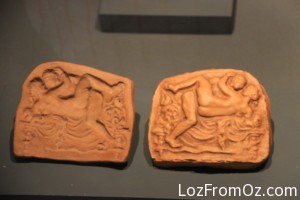 Aphrodite was the goddess of love, beauty, pleasure and procreation. She was always depicted as a beautiful woman often accompanied by the winged godling Eros.  Her attributes included a dove, apple, scallop shell and mirror. In classical sculpture and fresco she was usually depicted nude.

Eros was the god of love, or more precisely, passionate and physical desire. Without warning he selects his targets and forcefully strikes at their hearts, bringing confusion and irrepressible feelings or, in the words of Hesiod, he ‘loosens the limbs and weakens the mind’. 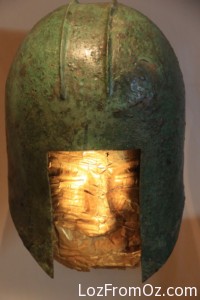 The next section is dedicated to the dead and beyond. Did you know that the ancients buried some of their warrior dead in their armour?  This warrior was buried wearing his helmet and his face was covered with a golden mask.

The facial characteristics must have been created by pressing the gold sheet on the dead man’s face.  It is from a tomb dating around 520BC.

Throughout all museums there are warriors with gold masks, armour and weapons.  They are incredible, and just as incredible is that they could get the gold sheeting so thin it would show the details on the face.  We have also seen in previous museum visits that graves were decorated with relief slabs. 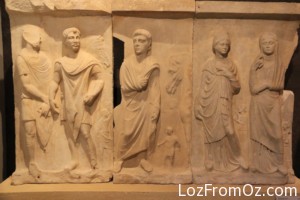 The ancients believed in gods and the afterlife, funerals were an important part of the transition from life to death.  So they created proper rituals that would enable the body to enter the afterlife peacefully—but if done incorrectly, the body would enter Hades.

This slab was retrieved from Derveni Cemetery and dates from around 30 BC.  Although the details of the people are unknown, we can still admire the skill of the carvings  Take note of the horses in the background.

Next are many marble heads and statues.  I am sure that if all the heads and statues got together they would be able to populate the entire country of Greece.  Some of the items are very worn but others are still in relatively new condition.

Below left is a relief dedicated to Apollo and Artemis dated 2nd c BC. Apollo is shown with a kithara and highlights his identity as god of Delphi.  His sister, Artemis holds a phiale and is referred to ‘she who leads the way. 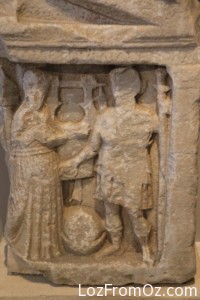 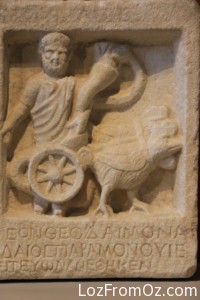 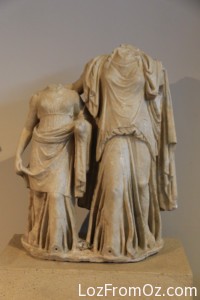 Above centre is a votive relief dedicated to the god Hades who is climbing into a chariot. It was dedicated by the priest Hadaios in the 2nd c A.D.  Right is Demeter and Persephone dating late 4th – early 3rd c B.C.

There are so many statues dedicated to the gods – the structures of ancient days must have been wondrous to behold – I am so lucky to actually stand here before them and make silent prayers to honour them. 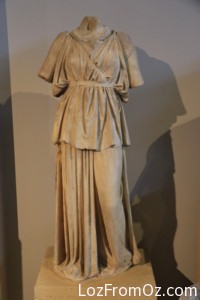 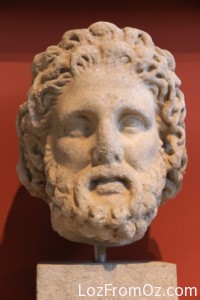 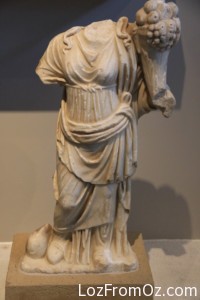 Above left dates from late 4th c B.C and is most probably Artemis – centre is a bearded god – maybe Poseidon from 3rd c B.C – right is Tyche – the presiding deity who governed the fortune and prosperity of a city and its destiny. She is the daughter of Aphrodite and Zeus or Hermes. This is a copy of a 4th c B.C original that was unearthed in the 2nd c A.D.

From statues we move on to some glorious mosaics – can you imagine how many hours these took to assemble from cutting the tiny stones to the finished product?

Below is a Dionysiac composition which was taken from the floor of the formal room of a wealthy house circa 200-250A.D.  It depicts the arrival in Naxos of Dionysus and his followers and the discovery of Ariadne

The below mosaic comes from the floor of a formal dining room – circa 250-300 A.D.  It was the first thing a visitor would see as he crossed the threshold of the room.  It may portray a type of food offered at meals as there is no hint of water or sea. 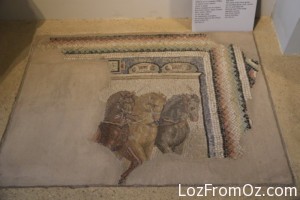 This mosaic is another from the floor of a formal dining room.  This part comes from the central image of a four horse chariot race 250-300 A.D.

It is tragic that the mosaics are not complete – just imagine how grand they would have been and just how impressed visitors would have felt once they entered the houses. 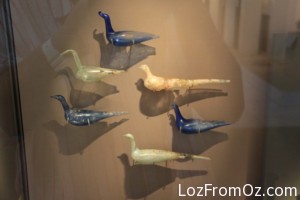 These lovely glass birds contained perfumes or cosmetics.  Access to the contents  was gained by breaking the end of the bird’s tail.

This type of container was made by glass blowing, a technique perfected circa 50 B.C. by glass workers in the eastern Mediterranean region.

This has been a long, long journey but an incredible insight to ancient Macedonian history.  We are nearly at the finish line but we have to pass by more marble busts and artefacts – 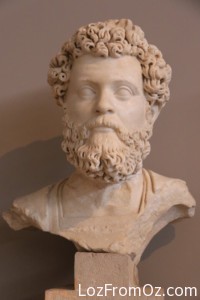 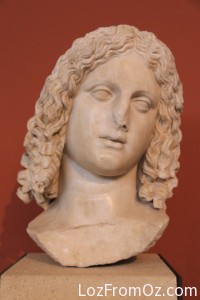 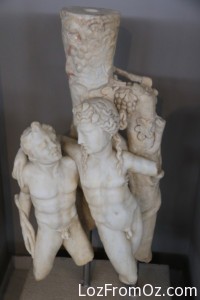 Above left is another of my Roman favourites – the Emperor Septimus Severus – 196-200 AD. Discovered in a northern Greek workshop, there are slight traces of decoration on the shoulders and chest.  Centre is a head thought to be of Alexander the Great and left is a table support showing a young Dionysus embracing a Satyr who is holding a stick used in hunting hares or for use as a shepherd’s staff.

Well, did you enjoy your time at this fabulous museum?  So many treasures – so many memories and now it is time to walk back along the harbour to my hotel and maybe get something to eat.

There are lots of restaurants but they are all packed with tourists – I need a nice quiet spot so I decide on a small cafe close to my hotel. The prices and the food looks good so I am guided to my table.  About 10 minutes later I am still waiting for my order to be taken and I a starting to think this may not be a good choice.  But he finally arrives and I order grilled shrimp with lemon sauce which sounds delicious. 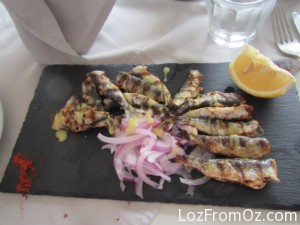 Twenty minutes later I am thinking why is this taking so long – but here he comes – I get excited and he puts the plate down and I think they don’t look like shrimp to me – but before I can say anything he is gone. He has brought me sardines.

So now I spend more time trying to catch his attention.  I tell him these are not what I ordered and he drags out his order, looks at it – looks at the plate and agrees. So now I have to wait another 20 minutes for my correct meal.

I am sorely tempted to walk out – what a mess up.  Lousy service, wrong meal, but finally the shrimp arrive – 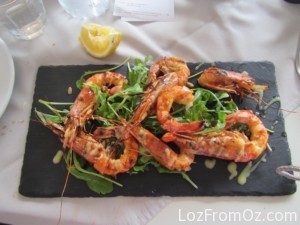 Now that’s more like it. Grilled shrimp with green olive and lemon dressing. Only took around 45 minutes from time of ordering to time of serving. Must admit though they were delicious – and no he didn’t give me a discount because of the stuff up. I will say though, there’s nothing like a good old Aussie prawn.

I am glad to get to the hotel – unpack and rest up.

Tomorrow is my tour of Dion and Mt Olympus – –