MACEDON GOLD – all that glitters is not gold 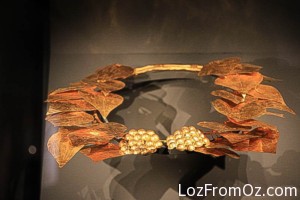 OK – I hope that everyone is refreshed because now it is time to discover the most magnificent of treasures – The Gold of Macedon including the showpiece – the Derveni Krater.  We will start off slowly and build up – but first a little bit of history for you to understand the historical importance –

During antiquity, Macedonia was famous for its metal sources, whose abundance was the reason for the creation of artistic masterpieces since a very early period as well as for its financial strength. River gold was widely used, such as from the river Echedorus (modern-day Gallikos), along with ores on mountains such as Pangaion or Dysoron. 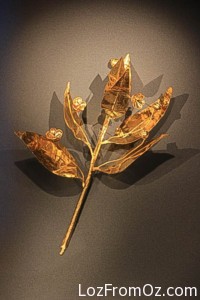 This permanent exhibition is dedicated tο the ancient Macedonian finds of precious metals. On display are burial assemblages that included artefacts made of metals, which accompanied the dead to the afterlife. Among them are weaponry, symposium vessels made of silver or bronze and top-quality jewellery. The exceptional wreaths form the largest collection of its kind in the world.

In historic times, metallurgy flourished twice. Once in the late archaic and early classical times (late 6th and first half of 5th c. BC) and later on during the late classical and early hellenistic times (early 4th – 2ndC BC). The artistic and technological quality of the artefacts is remarkable, employing techniques such as filigree and granulation in their manufacture. 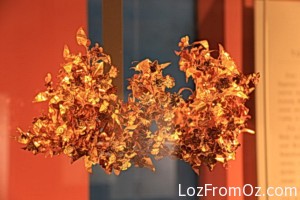 This is a gold blossomed myrtle wreath dating 350-300 BC.  Illicitly traded from Central Macedonia it was returned to Greece after an agreement with the J. Paul Getty Museum of Los Angeles.  How intricate is this work?  Standing here looking I certainly am gob smacked by the delicate designs.

Below are items discovered at the Cemetery of Pydna. Left is a gilt terracotta piece showing gryffons attacking a deer. Dating from 350-300BC, it was a decoration on a couch.  Right is a decoration from a wooden casket which has not been preserved.  It shows Zeus, Artemis and Athena. 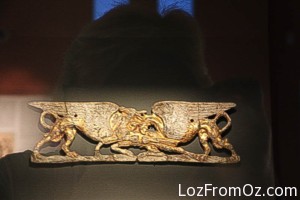 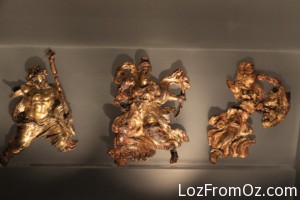 The glint of gold is everywhere but there is one object that I want to see more than anything else – the Derveni Krater.  A unique and sophisticated piece of metalwork, it was found in Derveni Grave 2 and used as a depository urn for the ashes of the deceased.  Its original function was that of a vessel to mix wine and water. Spoiler alert – lots of photos coming up – 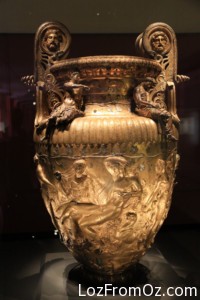 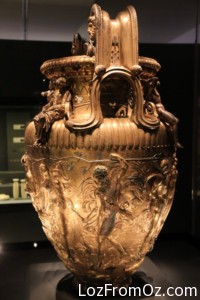 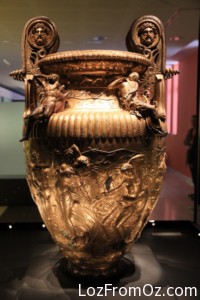 Do you believe this workmanship?  I am stunned and walk around it so many times that I am sure the staff are thinking I am casing the joint.  I can’t believe that some people just give it a glance and then continue on their merry way.

Dating from 330-320 BC – the decoration is a hymn to the god Dionysus, to his presence over nature and to his power to give both life and death.  Above left – It shows his sacred wedding to Ariadne – the naked Dionysus has placed his leg on his wife’s thigh and Ariadne, holding her veil up gazes at her husband.  A sacred panther stands behind Dionysus. 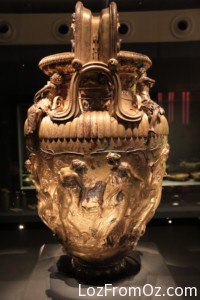 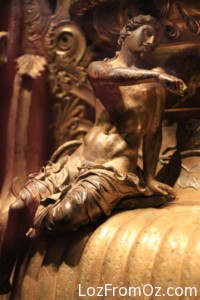 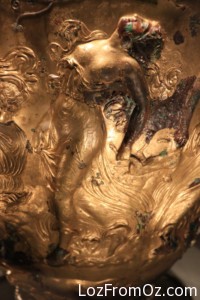 Surrounding the couple are the god’s followers, maenads, some carried away by their orgiastic dance, while other sit atop the shoulder of the Krater. Mythical figures, tame and wild animals, vines and ivy branches adorn all the surfaces. 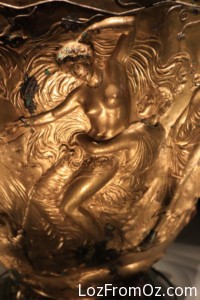 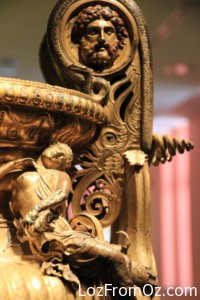 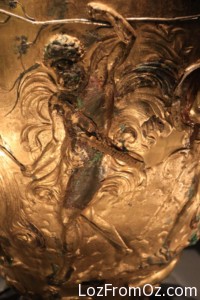 The gold colour is owed to its composition of bronze and a large quantity of tin, but without a trace of gold!!!  I hear you ask then why is it with the Gold of Macedon?  Well, I don’t know – and does it really matter? On the lip of the Krater an inscription in silver letters gives us the owner’s name – Astion, son of Anaxagoras of Larissa.  It is not known whether the deceased was himself the vase’s owner.

Below are some more golden objects – 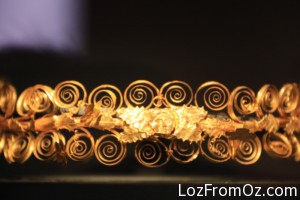 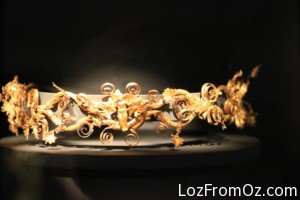 These are golden myrtle wreaths – above left is a bust of Aphrodite, on the right is a diadem with Eros – exquisite samples of the workmanship of those times. They date from around 350-325 BC.

Photos below on the left is the full wreath – on the right are closeups of the detail. 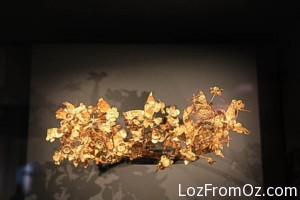 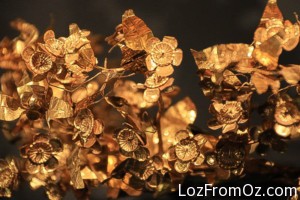 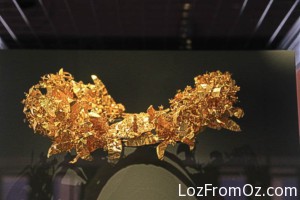 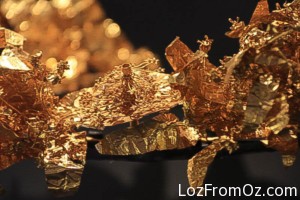 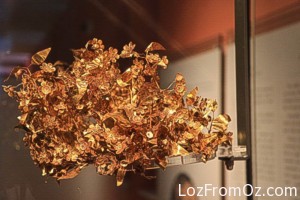 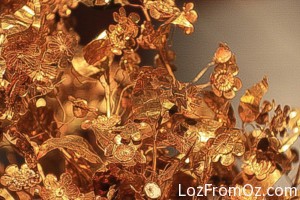 Do you think the craftsmen of today could replicate such delicate beauty with the tools that the ancients had? Personally, I think not.

As much as I hate the thought – I have to move on. There is still much to see, but I will never forget my time here with Dionysus and his beautiful Krater.