ONTARIO to ST HELENS – the end of the trail 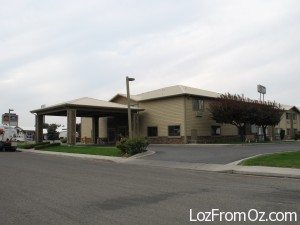 Tuesday – today is the last round-up for two of us – I still have three days to go when we get back to St Helens.  This is the hotel we stayed in on our Great 2007 Road Trip.  Nice and comfortable and reasonable rates.

After our morning showers we head for breakfast where we enjoy a meal that should hold us for a couple of hours.  After packing the car – it doesn’t need much work as we left most of the belongings in it last night, we check out and head off for good old St Helens.

We have nothing planned for today. Yep that’s right – another day with NOTHING PLANNED – just the drive back home.  Well, before you can say ‘I don’t believe it’, we see a sign – Pendleton Wool Mills.  Kylie says that Pendleton make great wool coats, blankets and lots of other items and it is not very far out of our way.  I knew it was too good to be true.  The work apparently is second to none when it comes to wool products so not one to miss an opportunity (or a bargain) Kylie and I decide a little visit should be in order.  Tyler groans!

Pulling into the car park we find that we have missed the factory tour by about half an hour – but not to worry – the outlet store is open and has plenty of bargains. 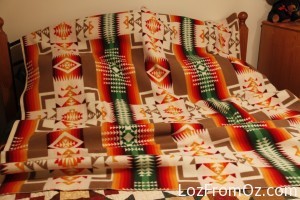 After looking at lots and lots of items – I decide on a Chief Joseph blanket.  Isn’t it wonderful? Normally it would have cost $300 but today’s special Tuesday price – $80.00.  These are factory seconds but I cannot see anything wrong with it.  I also get one for Kylie to help remember the trip.

HISTORY LESSON : Chief Joseph, or Young Joseph (March 3, 1840 – September 21, 1904) succeeded his father Tuekakas (Chief Joseph the Elder) as the leader of the Wal-lam-wat-kain (Wallowa) band of Nez Perce, a Native American tribe indigenous to the Wallowa Valley in what is today the State of Oregon. He led his band during the most tumultuous period in their contemporary history when they were forcibly removed from their ancestral lands by the federal government and forced to move onto an reservation in Lapwai, Idaho. A series of events which culminated in episodes of violence led the those Nez Perce who resisted removal including Joseph’s band and an allied band of the Palouse tribe to take flight to attempt to reach political asylum, ultimately with the Sioux chief Sitting Bull in Canada.

They were pursued by the United States Army in a campaign led by General Oliver O. Howard. This epic 1,170 mile fighting retreat by the Nez Perce became known as the Nez Perce War. The skill in which the Nez Perce fought and the manner in which they conducted themselves in the face of incredible adversity led to widespread admiration amongst their military adversaries and the American public.  Coverage of the war in United States newspapers led to widespread recognition of Joseph and the Nez Perce. For his principled resistance to the removal, he became renowned as a humanitarian and peacemaker. 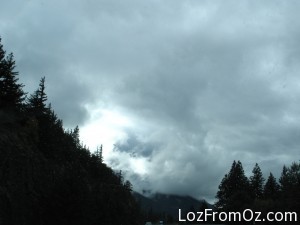 Getting back out to the car with our purchases – we have to reorganize everything and by the time we are finished we cannot see out the back window!  Kylie is going to have an interesting drive home that’s for sure.

Our drive takes us through the Columbia River Gorge where the weather changes from one minute to the next.  Sunny, overcast, rainy, sunny again it is hard to keep up with what it is doing.  I must admit though sometimes it is pretty dramatic – and with the cloud cover feels like it is nearly night.

When we start our drive through the Gorge the land is mountainous but barren.  This soon changes when we drop to river level and we see our great tall trees again. 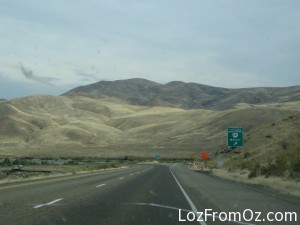 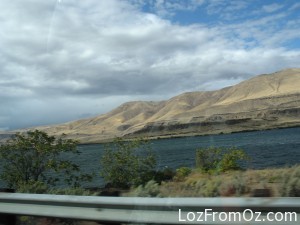 We arrive home and are exhausted.  Will we unload the car now or won’t we is the question.  Let’s just get on with it and do it now and then we won’t have to worry about it.

Kylie goes inside to check on her babies – Missy, Hammy and Jasper and even though Jasper is glad to see her the other two are still in a huff because they were left behind.  In the end everyone says hello and all is well in the world again.

We grab something to eat and then we all literally fall into bed.  The holidays are great but boy – they certainly take a toll on you at the end.  Love it – just love it!

Highlight of the day: getting my blanket!