KALAMBAKA to METEORA – hope you are not afraid of heights 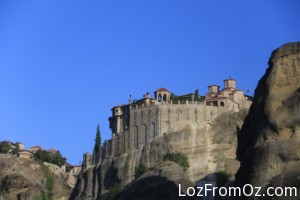 Sunday – today we are off to those sky hugging, gravity defying Monasteries of Meteora.

I am going to try and get everything done on one days post.  Let’s see how we go.  It may be a bit long – but that’s OK (I think).

It is a beautiful crisp, clear morning but I am sure it will heat up as we go along.  A few kilometres down the track we catch a glimpse of the impressive rocks of Meteora rising from the plains of Thessaly. Cameras are clicking –

The word Meteora means “suspended in the air” and on these incredible rocks reaching more than 600 metres was formed one of the most important monastic communities of Greece.  A spectacular landscape with Byzantine monasteries perched on top of steep rocks that house priceless artefacts and wall paintings.

Today only six monasteries are active with a small number of monks or nuns who reside on Meteora. In 1988, the monasteries were included in the UNESCO World Heritage List.

Time for another quote – thanks Professor and written by Dr Henry Holland in the 19th century.

‘The pinnacles of rock – they rise from the comparatively flat surface of the valley – a group of isolated masses, combs and pillars of rock of great height and for the most part so perpendicular in their ascent, that each one of their numerous fronts seems to the eye – a vast wall formed rather by the art of man than by the varied and irregular workings of nature.  Awe inspiring and daunting in the extreme’.

As we drive along, Socrates slows down for us so that we can get some photos – what a treasure he is.  He also tells us that we will also get some good views on the way back down. 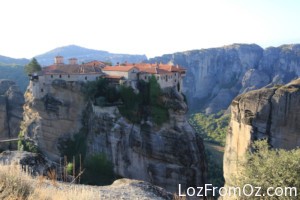 This is the Holy Monastery of Varlaam and is named after the first monk to build a church here. That was in 1350 and the hermit monk built three churches, a room for himself and a water tank.  Unfortunately no other monks joined him and after his death the site was abandoned for 200 years.

In 1517 two monks from Ioannina, Theophanes and Nektarios Apsarades re-founded the monastery.  Nowadays the monastery can be reached by a bridge and has a small museum with a lot of 16th century paintings. 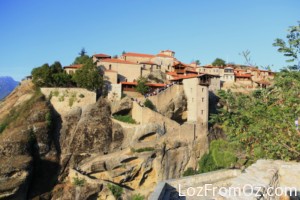 We are making our way to the Holy Monastery of Great Meteoron where we will be able to visit.  Travelling these narrow roads in a dirty big bus gets the heart going – obviously our driver Socrates has had plenty of practice.

When we have parked the bus and walked up the hill I get a glimpse of the walk to the monastery – about 2km of going down stairs – not so bad – but then going up to the monastery on the other side of the little bridge and then back down and up on the return.  I politely decline the outing and will be content to sit in the shady refuge.

It is a lovely cool place with some great views – and a wonderful little chapel for quiet moments. 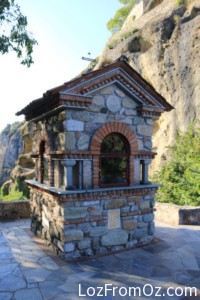 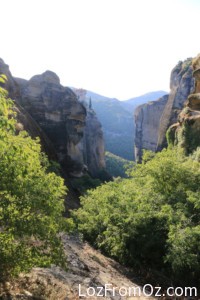 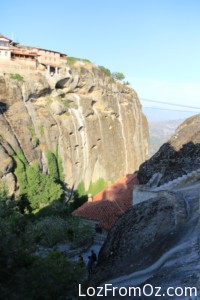 It is also known as the Holy Monastery of the Metamorfossis (Transfiguration of Christ) and is the oldest and largest of all the monasteries.  Built on the greatest rock of the complex, the Platys Lithos or Playtlithos, it was founded a little before 1340 by a scholar monk of Mount Athos, Saint Athanasios Meteorites. 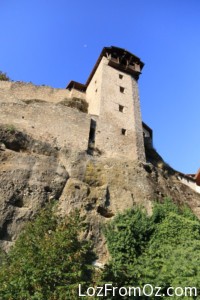 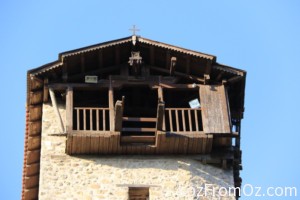 Far left is the tower where the monks and visitors would access the monastery.

There was a wooden basket at the bottom where you would sit and then the monks would manually hoist you to the top of the tower.

I remember seeing something like this in the movie ‘Boy on a Dolphin’ where Clifton Webb – an extremely rich purveyor of both lawful and unlawful items of history –  is searching for information and goes to Meteora where he gets in the wooden basket .

After a bit of a heart starter wobble at the start and on the way up, on his arrival he asks the monk ‘May I ask, who carries your insurance?’ The monk replies ‘We put our trust in the Almighty’. Mr Webb then states ‘A very safe company’.  But I digress. 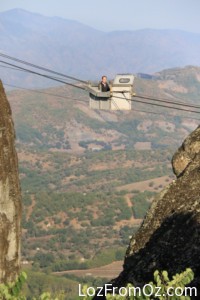 Things have improved since then and this is now the express route to the monastery.  Sure would beat the crowd but I am not too sure what would happen on a windy or rainy day. I would hope that the service would be cancelled but then again they could be thrill seekers!

Whilst I am waiting for the return of the tourists, a group of grubby people arrive and over-run my little refuge.  They are loud, smelly and are spitting all over the place not to mention dropping wrappers etc.  A great advertisement for their country no doubt. It takes all my efforts not to say something and create an international incident. Thankfully they do not linger and are soon on their disgusting way.

After about an hour our group is together again and we are on the road back to the bus.  We get to see some of the other monasteries here – 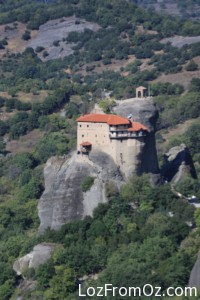 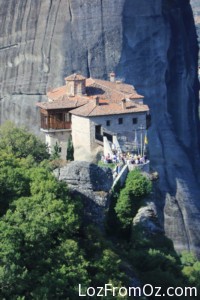 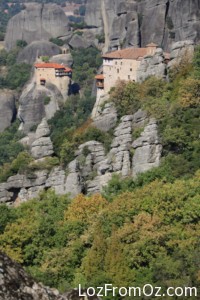 Above left is the Holy Monastery of St Nicholas Anapafsas.  It was founded in the 14th century and is most famous for its frescoes by the famous Cretan artist Theophanes Strelitzas.  Centre is the Holy Monastery of Rousanou. Built in 1545 by Maximos and Ioasaph of Ioannina.  It is unclear who it is named after but it is dedicated to St Barbara.  Far right – is just a good photo – well, I think so.

Our next view is the Holy Monastery of the Holy Trinity. 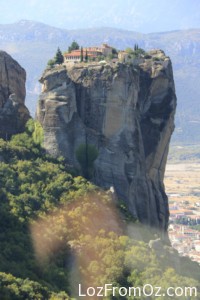 You may recognize this monastery.  It was used in the James Bond movie ‘For Your Eyes Only’ and features in the climax of the film where Bond ascends the rock cliff to recover a decoder and intrudes upon the bad guys who are using the monastery as a hideout. Eventually Bond throws the decoder off the cliff top when approached by the KGB.

Back to actual facts – The monastery was built in 1458 and had many treasures but these were looted by the Germans during WWII.  This Monastery is very close to the Saint Stephen’s Nunnery and it is perched on a steep and magnificent rock. It had already been organized Monastery since the year 1362 as indicated in a document by Symeon Uressis Palaeologos. Visitors have to follow a pathway that directs them initially to the foot of the rock, before they start walking up around 140 steps.

That really is a magnificent Monastery. 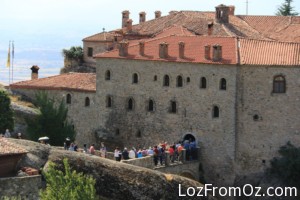 We have now arrived at the Holy Monastery of St. Stephen.  This is the most accessible monastery, where instead of steps I just have to walk a bit and cross a small bridge to reach the entrance. This is the only monastery that is run by nuns.

As we cross the bridge and through the entrance, I am given a long black wrap around skirt to put over my knee length shorts – the dress code is strictly adhered to and I am not one to argue.

There is no photography as we walk through the inside – no, not even for me – but as soon as I get to where I can use the camera I do so.  But first a bit of history – the beginning of monastic life on the rock of Agios Stephanos dates back to early in the 12th century.  The Monastery includes two cathedrals; the old 16th century chapel which was severely damaged during WWII and Greek Civil War; and the 18th century main cathedral that is dedicated to Saint Charalambos and includes his holy relics.

Most monasteries, such as this one, include the holy relics of their saints or founders in their main cathedrals.

Once through and back into the open air the amount of gardens is incredible.  There certainly is a lot of space – it is very deceiving from the little bridge. 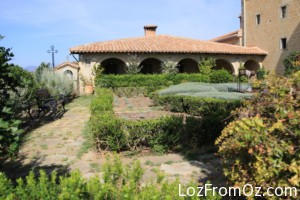 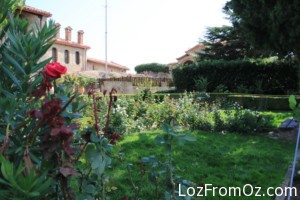 I head to the rear of the gardens and the view is amazing.  It looks towards the vast valley of Thessaly, the river Pinios and the Pindos mountain range across the plain.

When I leave I hand the skirt back and the nun smiles and blesses me – I think she must have had some insight to our journey back down in the bus – it was a nightmare. 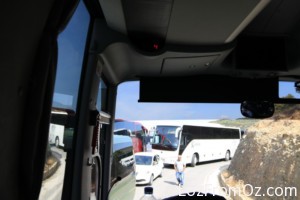 There are so many busses trying to get either up or down the narrow road, sometimes there are three abreast until one pulls off into the little parking bay on the edge of the cliff!  We are told by Socrates that it is like this all the time – but don’t worry because the drivers know what they are doing which seems to be the case and everything is working out OK UNTIL the police arrive and start directing traffic – that turns it into an even bigger nightmare.  Sitting in the front seat may not have been the best idea as I am getting a grade A view of what is coming or what is about to come along. 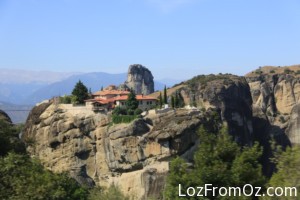 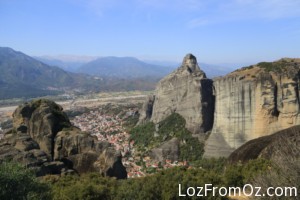 We stop at a rather nondescript place for a cafeteria type lunch – not exciting – no photos – and then we are on our way back to Athens.

It is great to get back and relax for a bit – and then I decide I will do some night photography from the viewing floor at the top of the hotel – that is about as much energy that I have. 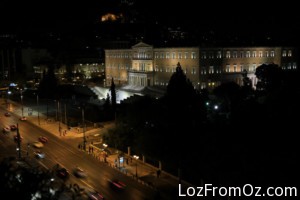 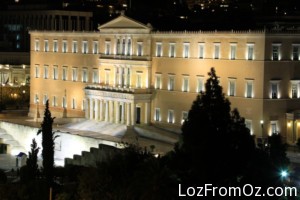 The night is so clear and every now and again a nice cool breeze comes along – some great views to be had – the above are taken from the front of the hotel – the next two are taken from the back looking towards the Olympic Stadium and the Acropolis. 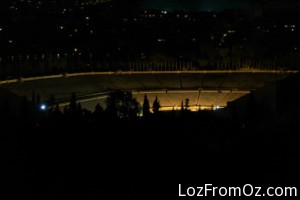 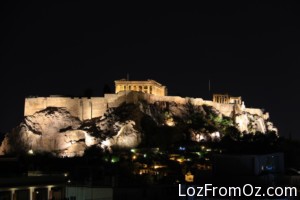 The body and the brain are starting to come to a standstill so it is time for me to pack up my gear and crawl back to my room.  This has been a long, long day – and I am so glad that I did not walk up and down all those steps at the monastery.

Tomorrow I can sleep in and then it’s off to discover the Ancient Agora.