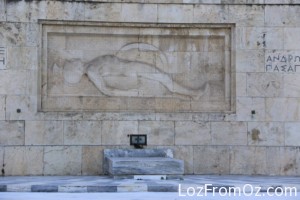 Monday – surprisingly enough I am awake early even though I fell into bed last night and was asleep before my head hit the pillow.  So let’s get to it.  A nice light but filling breakfast, some really strong coffee and then it’s off to spend the day wandering around Athens.

One day maybe one post?  Looking at the photos I don’t think so.

My first stop will be Syntagma Square to see the Changing of the Guard (again) but this time there is hardly anyone there and it is nice and shady and cool. The Tomb of the Unknown Warrior is very moving – as are all war memorials.  The sculpture represents the naked male figure of a dead warrior lying on the ground. He holds a circular shield in his left hand and wears an Ancient Greek-style helmet.  The names of battles in recent history where many Greek lives were lost are written into the limestone walls around the sculpture. 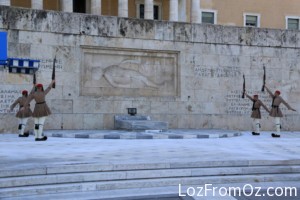 Of course the Evzone Guard protects the memorial 24 hours every day.  See previous posts about that. I wait for the Changing of the Guard – it is always incredible no matter how many times you see it.

Such a solemn moment, and once it is finished I walk across the road and down though Syntagma Square to begin my journey through the streets.  My first discovery is the Metropolitan Cathedral of Athens (below left) and some statues of rather distinguished gentlemen.  The leafy Mitropoleos Square where these are situated is lovely and quiet with people sitting under the trees and enjoying their early morning coffee. Very peaceful indeed. 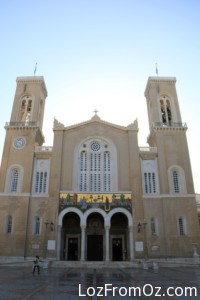 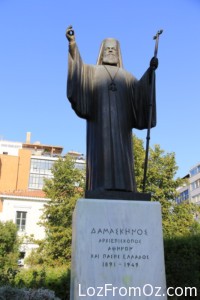 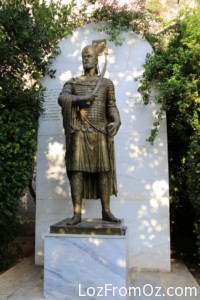 The centre photo is Archbishop Damaskinos Papandreou who was the archbishop of Athens and Greece from 1941 until his death. He was also the regent of Greece between the pull-out of the German occupation force in 1944 and the return of King George II to Greece in 1946.

Above right is Konstantinos XI who  was the last reigning Byzantine emperor, ruling as a member of the Palaiologos dynasty from 1449 to his death in battle at the fall of Constantinople in 1453.

A leisurely ten minute walk sees me at the Roman Agora.  It is not a place that I had on my plans and anyway I can get a good view from outside the fence.  You can find loads of information on the link – so I’ll just put in some photos – 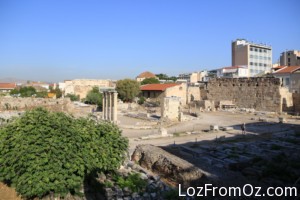 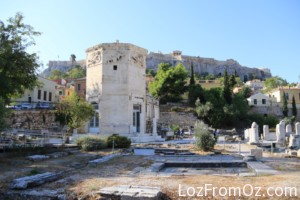 Above right is the Tower of the Winds  It was erected about 100–50 BC for measuring time. Still standing, it is an octagonal marble structure 12.8m high and 7.9m in diameter. Each of the building’s eight sides faces a point of the compass and is decorated with a frieze of figures in relief representing the winds that blow from that direction; below, on the sides facing the sun, are the lines of a sundial.

The morning is heating up – got to move on – next stop Monastiraki Square. 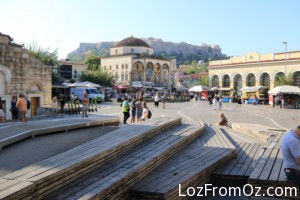 A five minute walk – you have to hand it to Athens – everything is so close and within walking distance.  This place is known as a great meeting place no matter what time of day.

Surrounding the square are many stalls selling fruit, drinks etc.  Main point of interest is the Flea Market which is at the far end of the photo.  It is an alleyway of shops selling anything you want.- lots of rubbish but there are some good things as well.  The surrounding streets are crammed with traditional tavernas and restaurants, many with the advertised ‘Acropolis views’. Who are they kidding?  What place in Athens does not have an Acropolis view? 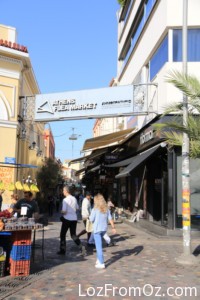 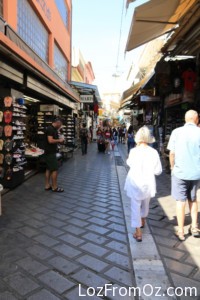 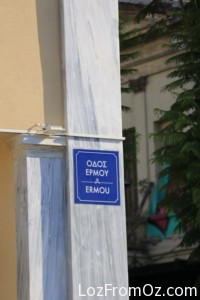 As it is still relatively early I walk down through the Flea Market looking at the shops but nothing catches my eye – I am especially looking for some roomy white shirts.  I bought a great one here back in 1998 – yeah I know, mission impossible – but I live in hope.  At the end of the Market is Ermou Street.  Ermou Street, is the main (read most expensive) shopping street in Athens and at one and a half km in length that is a lot of shops.  It also connects the Market with ancient sites.

Back through the Flea Market – still nothing for me – and at the square I decide to buy another HOHO ticket – this turns out to be a great idea and money worth spent as I can tool around in comfort and get a nice breeze to boot.

Temps are starting to climb – couple of shots from the bus – don’t know who the statue is, so if anyone can help please let me know – 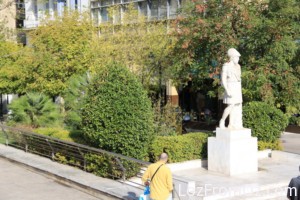 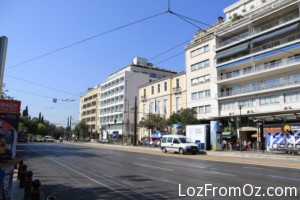 Down Oktovriou Street and we stop, of course, out the front of one of my favourite places – the Archeological Museum.  I am sorely tempted to jump off the bus but decide I must press on. 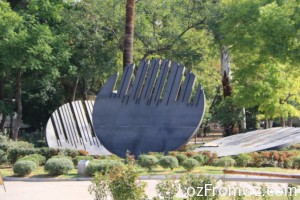 There is a rather strange sculpture out the front of the Museum that looks like, well, I don’t know what it looks like. Maybe extra large salad servers?

How are you enjoying the ride so far?  I love these buses.  Sometimes they are packed, sometimes there is plenty of room and I seem to have hit somewhere in the middle. Definitely worth the money and definitely the way to go even though Athens is pretty walkable. I hate pushy people and pushy crowds. 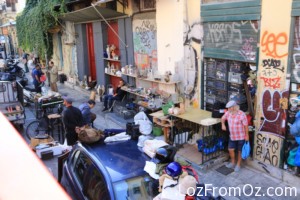 One more quick snap as we head back – look at these markets.  Not only goodies in the shops but on shelves, cars, footpaths and sometimes even on the street which is not very wide to start with. Lordy, what an amazing collection of items.

I will now head back to The Ancient Agora bus stop, which is where I got on in the first place but now I am relaxed.