ANCIENT AGORA – time to go to the market place 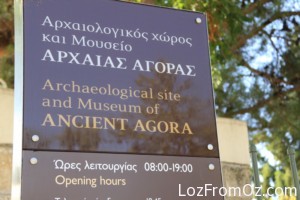 I am not relaxed for long!  Even though it’s only a five minute walk from Monastiraki Square, there are loads of people perusing and buying.  Plus the temperature is getting hotter – oh well!

Situated beneath the northwest slope of the Acropolis. The word “agora” means an assembly of people.  In modern Greek the term means “marketplace”.

Just about every ancient and modern city includes a place for an Agora, and this one, being located at the heart of the city, remained in use either as an assembly, as a commercial district, or as a residential area for about 5000 years.  Consequently the area has undergone countless building, destruction, and rebuilding cycles. 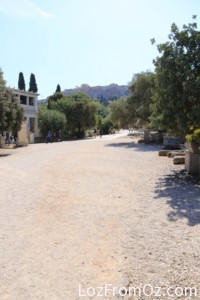 The main entrance is from Adrianou Street and with my mate Rick Steves, who is always full of interesting information, we proceed to walk down the Panathenaic Way that leads through the Agora and up to The Acropolis.  This is the road the ancient processions would follow, it was also the main street.

Imagine walking along it all those years ago – on the left stood the Stoa of Attalos on the right was the main square surrounded by gleaming white marble buildings – temples, government buildings, theatres all fronted with columns and topped with red tile roofs. The streets were lined with wooden market stalls selling produce, pottery, clothing and trinkets.

At night people came for plays and concerts – the tavernas were very busy.  Many foreigners passed through here on their journey as this was the main intersection and the centre for speeches, political announcements and demonstrations.  This was the place to be as you could even run into Socrates or Diogenes. WOW! 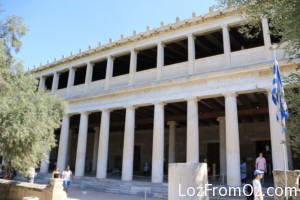 Time to explore the Stoa of Attalos.

It was a place for Athenians to meet, walk and do business, in other words it was a Hellenistic version of a shopping mall with 42 shop spaces over two levels.

Built in 150BC by King Attalos II of Pergamon, who, though not a Greek, was fascinated by Greek culture and it was his way of thanking the city for the education he received in Athens.  The Stoa was destroyed in AD 267 by the invading Herulians. 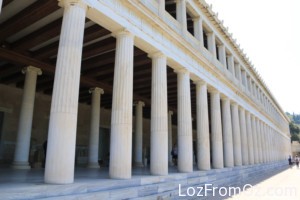 A new Stoa was built between 1953 – 1956 by the American School of Classical Studies with the financial support of John D. Rockefeller, Jr. During excavations, they unearthed over 160,000 items dating from Neolithic times to the 19th century.

Today, you will find a museum on the lower level, with remnants and ruins that were part of the Agora during the Hellenistic period, including sculptural pediments from the frieze above the Temple of Hephaestus.  The upper floor of the Stoa houses a permanent exhibition of sculptures from the Ancient Agora, representing Athenian art from the late Classical, Hellenistic and Roman periods.

I head to the far end and the entrance but I discover a wonderful selection of statues under the covered porch.  This porch housed many shops and was also used to protect the people from the rain and sun or a meeting place to carry on interesting conversations. 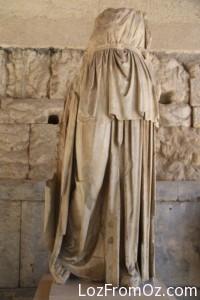 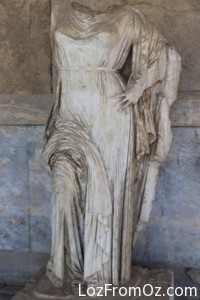 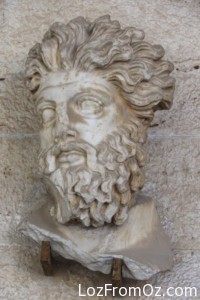 Above left is a female statue from the Temple of Apollo Patroos – 330BCE.  Centre is most probably Aphrodite – early 4thC BC.  Right is the Head of a Triton from the Odeon of Agrippa – 150-175AD.  This is just a small selection – lets move inside to the Museum.

A single long hall houses the displays of interesting artefacts.  There is plenty of information on each display so you always know what you are looking at. Great stuff! First up are displays of pottery – 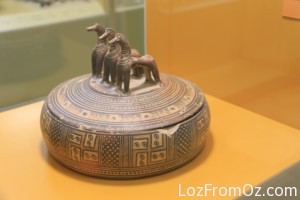 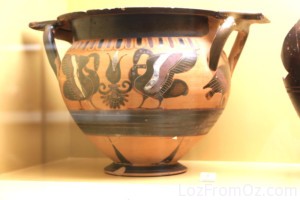 Above left is a Pyxis (a container with a separate lid). This lid has a handle in the form of three horses – 725-700BC.  On the right is an egg shaped Krater with facing birds dating from 650BC. 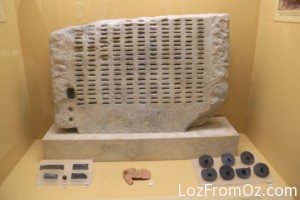 As Greece was the cradle of democracy there was, of course, voting equipment.  The photo on the left is a fragment from a kleroterion, which was an allotment machine that allowed for the random selection of citizens to the various civic offices.

On the bottom corner of the same photo are examples of the bronze tickets (pinakia) that were inserted into the slots. An attached mechanism to the left of the slots allowed for the random selection process.

One of the more controversial policies of Athenian democracy was Ostracism. This blunt instrument of the state allowed its citizens to vote for the ten-year expulsion from the city of a person they deem dangerous or undesirable. In many cases prominent Athenian citizens with valuable contributions to the state were forced to leave Athens. In many cases citizens would ostracize a citizen out of fear that they might have amassed too much political power or influence, and in many more cases they became the victims of overzealous political opponents. 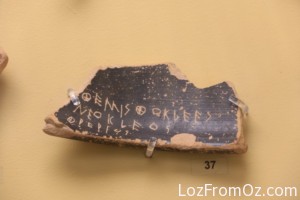 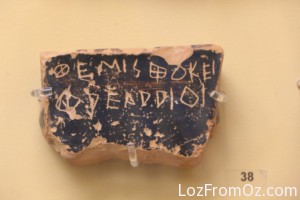 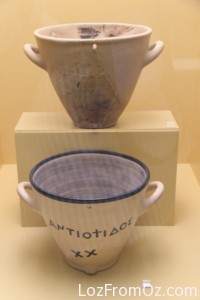 These are Clepsydras – otherwise known as water clocks.  It was used to time speeches at council meetings and took six minutes for the water to drain – once empty – the speech was finished. Maybe that is where the phrase ‘good to the last drop’ was born.

The top one is an original from the late 5th century BC. The bottom is a reconstruction of a clay original.  Maybe it is time they made a comeback to modern politics.

Even though the museum is not very big, there are many interesting items that have been unearthed in the Agora.

For example there are these ancient coins. 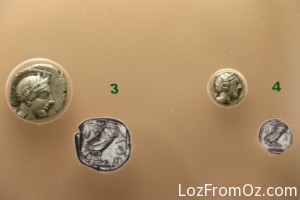 These Drachma and Tetradrachma feature Athena in her helmet and also her owl. Her owl is still used on today’s coins.

A Drachma was worth a full days wage.  In the Golden Age, people would put coins like this into the mouths of the deceased as payment to carry the soul across the River Styx. I am sure that there are many coins still laying under the earth in the countless ruins.

The exhibits finish with these sculptured Roman heads.  You can see that the Romans were more honest than the Greeks with how people looked. 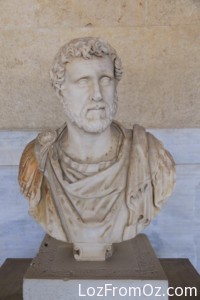 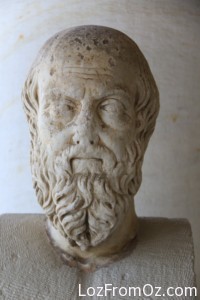 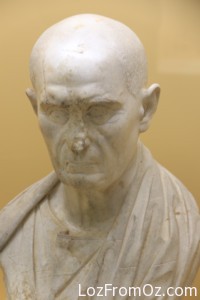 Above left is Antoninus Pius 138-161 BCE.  Centre is Herodotus 2nd C AD. Right is unknown from the period of Trajan.

We are now at the end our Museum walk but there is one more sculpture that deserves a mention. 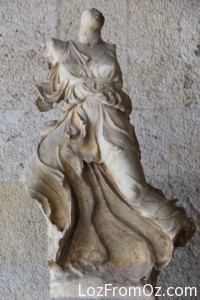 Statue of Nike from the Acroterion of the Stoa of Zeus Agoraios. Circa 415 BCE.

There are so many statues worldwide of Nike – or Winged Victory – maybe the most famous is in The Louvre in Paris. Here she is flying to the right, the back is less finished than the front and she is missing the head, arms and parts of the legs. Even though she is not complete, I still think she is beautiful.

Time to go back outside into the heat to explore the ruins and you can read about that in Part 3.