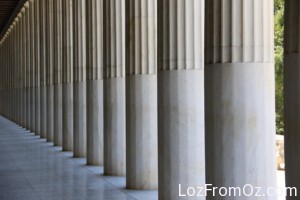 Stepping outside into the heat, I head for the iced water fountain.  This is so deliciously icy cold I could put my head under the tap – but don’t worry – I refrain.

As I walk back through the row of columns, Rick tells me to notice that the bottom of the columns are polished smooth and the fluting starts nearly 2 metres above the ground.  These columns were designed for leaning against – shoppers who wanted a rest and those who were listening to philosophers discussing high concepts.  They are even great for us tired tourists of today. 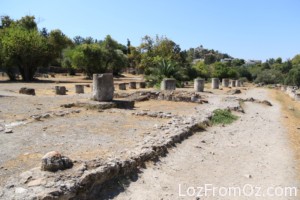 Once I get back to the end of the columns at the Southern end I turn right, cross the Panathenaic way and continue straight along the walkway that cuts west across the middle of the Agora.

Left of the walkway is the large expanse of ruins known as the Middle Stoa.

Built in 180 BC, this long set of ruins that stretched right across the Agora was another big mall of shops and offices for busy Athens.

It looked something like the reconstructed Stoa but you have to use all of your imagination for that. Look closely among the ruins – there are two long lines stubby column fragments – these columns once supported the roof. I can also see some stone steps and some reddish coloured blocks from the foundations. 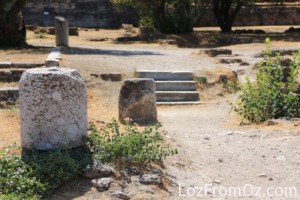 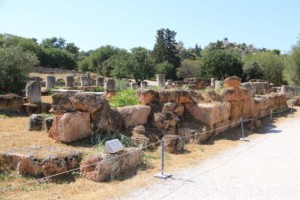 Around 400BC all this space was an open field used as a gathering place – there was no Middle Stoa.

Continuing down the lane to the midway point of the Middle Stoa is a wonderful top of a column – a Corinthian Capital.  Carved in the 4th C BC it shows the leaves of an acanthus plant.  This was from the Odeon of Agrippa built in 14BC – more about that later. 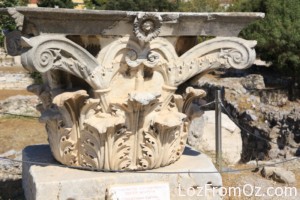 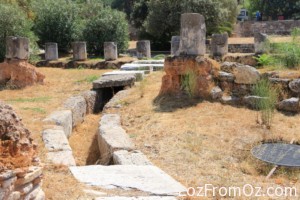 Another swig of icy water and it is time to cross the wooden bridge over the Great Drain. Built in the early 5th century BC, its purpose was to convey waste from the Agora buildings and rainwater from the surrounding hills.

From this spot – Rick elaborates on the wonderful views of the Acropolis. 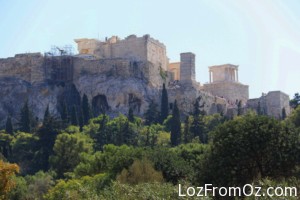 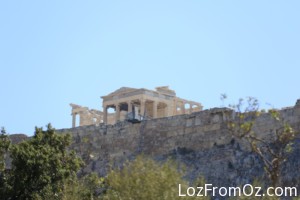 To the right of the Acropolis Hill is Mars Hill.  This is where the Apostle Paul preached to the population.

Just over the bridge is the circular ruin of The Tholos. It was a rotunda shaped building that housed the rulers of Athens. Built in 465BC at the dawn of the Golden Age – it was ringed with 6 Ionic columns and had a cone shaped roof. 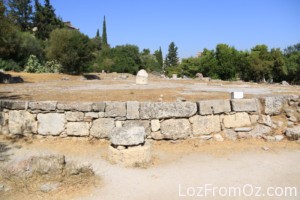 In the middle of the building stood an altar, It had a flame that was always kept burning representing the heart of Athens.  Today, it is marked by the broken column

The Tholos was the centre of Athenian government and was the headquarters, offices and meeting hall of 50 ministers who lived and ate here.  It also housed the official weights and measures – by law any shopper could stop here and check the weight of anything they bought. You could say that  The Tholos was the temple to democratic rule.

Thousands of adult male citizens made up the assembly and gathered periodically to choose 500 city council members who then chose 50 ministers who ran the day to day affairs. the 50 ministers governed from the Tholos, while the 500 met in a large hall called The Bouleterion. 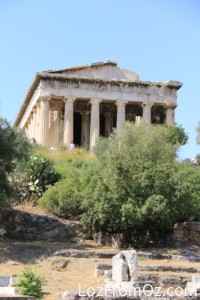 To the left of the Tholos is a set of steps leading up to the Temple of Hephaestus.

Dedicated to Hephaestus,  god of volcanoes and metalworking, he was the only one of the Olympian gods who was physically imperfect – he was lame.  He had to perform manual labour working as a blacksmith and was responsible for crafting all the weapons and armour for the gods on Mt Olympus including the armour with a fatal weakness worn by Achilles in The Iliad.

The temple is also dedicated to Athena Ergane, a form of the city’s patron goddess responsible for pottery and other crafts. 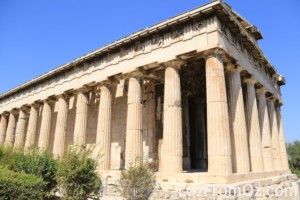 Built in 450BC at Athens peak, it is the best preserved of all the temples of the Golden Age.

A classic peristyle temple – meaning surrounded by columns – there are six on each end and thirteen on the sides. The building is constructed of Pentelic marble and decorated with sculptures in Parian marble. The ceiling was wooden, the roof tiles made of terracotta and there is a limestone step at the bottom of the platform.

The end of the temple facing the Agora is the East end and was the entrance. 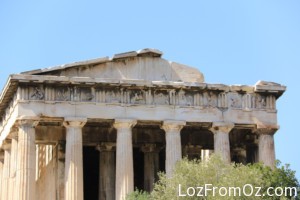 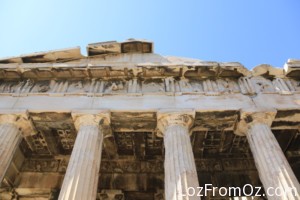 On the west end, the sculptures depict the fall of Troy. 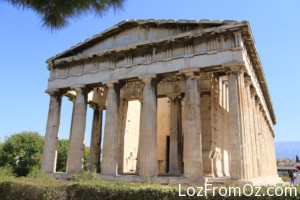 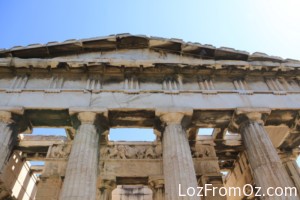 Inside, the space is divided into a pronaos (foretemple), a cella (inner shrine, with an interior colonnade) and an opisthonaos (rear temple). The east end of the enclosure is open, allowing the rising sun to illuminate the altar at the west end of the cella. Colossal bronze statues of Hephaestus and Athena flanked the altar. 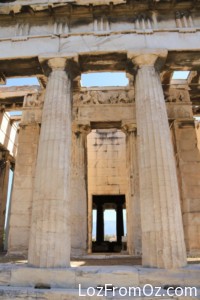 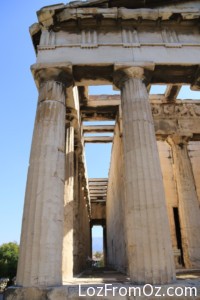 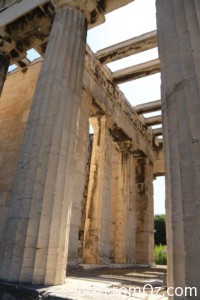 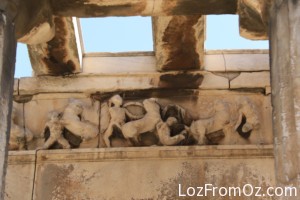 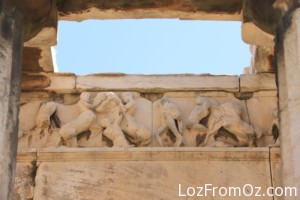 Back at the East end it is time to say goodbye to this magnificent structure, thanks Hephaestus, it has been a pleasure – down the steps and back into the Agora I am greeted by an old friend – see if you can guess – – 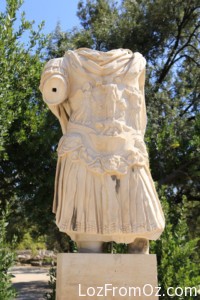 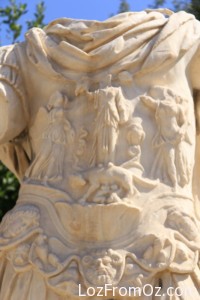 The body of an armoured statue, Athena stands on the she-wolf who breastfed the twins Romulus and Remus, mythical founders of Rome.

Do you know?  More clues needed? Emperor of Rome, brilliant, active and witty, Publius Aelius Hadrianus reigned over the mighty Roman Empire for 21 years (117-138 A.D.). During those years, he acted on his love for Athens, endowing it with important projects that transformed its urban fabric.  It is, of course, Emperor Hadrian – – for those that got it right – give yourself a pat on the back. For those that didn’t – read all my posts again!

It is so hard to recognise the ruins as most of them have only a few scattered stones.  One that is recognizable is the Odeon of Agrippa. 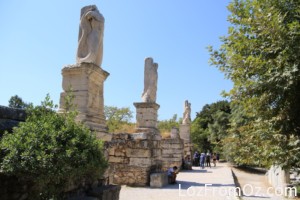 The large concert hall was built about 15 BCE, occupying what had previously been open space in the centre of the Agora. It was a gift to the people of Athens by Marcus Vipsanius Agrippa, a Roman statesman and general.

The two-storey auditorium seated around 1,000 spectators and was equipped with a raised stage and marble-paved orchestra area. Around 150 AD the roof of the Odeon collapsed and the structure had to be rebuilt. The interior was subdivided by a cross wall that reduced the capacity in half, to 500 visitors. 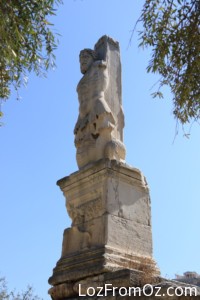 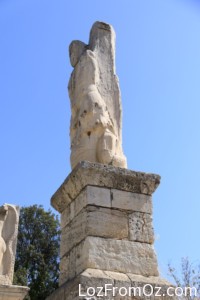 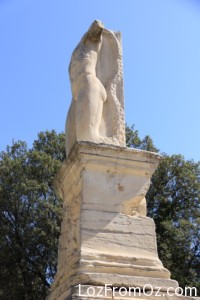 In this period large statues of Giants (with snake tails) and Tritons (creatures of the sea, with fish tails) were added to the façade.

I find a nice shady spot and sit for a while – just trying to take everything in – trying to imagine the citizens going about their daily chores – maybe even having a chat with Socrates – but after three hours I am dying for something to eat and maybe one of my icy coffees; but there are still a couple of things I need to see. 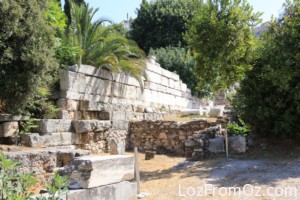 This is the Herulian Wall – built in the 3rd century AD, the wall was constructed in the years following the sack of Athens by the Herulians in A.D. 267.  It is made up almost entirely of reused architectural pieces taken from buildings and monuments destroyed by the Herulians: marble architrave blocks, Ionic and Doric columns, inscriptions, and statue bases were all used to make two solid faces, while the interior was filled with rubble. Square towers, now largely dismantled, projected from the face of the wall at regular intervals.

Time to mosey on up the Panathenaic Way – I will pretend I am in the procession – at the end of the road is the Church of the Holy Apostles. 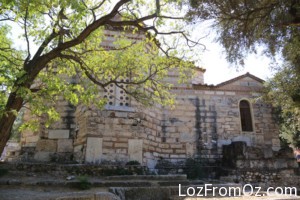 This church dates from the middle 10th century. It is particularly significant as this is the only other monument in the Agora, other than the Temple of Hephaestus, to survive intact since its foundation.

The architecture of the church is also significant as it marks the beginning of the so-called “Athenian type”, combining the simple four-pier with the cross-in-square forms. The altar and floor were from marble; thefloor plan had a cross with apses on four sides and four columns supporting the dome. Many interesting wall paintings from the 17th century survive in this church. 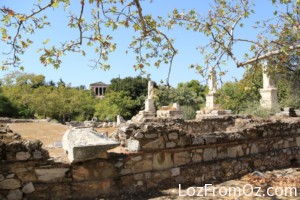 Time to walk back down to the entrance – get on the HOHO – and head for home.  My poor little foots are so tired – I am covered in sweat – a farewell photo – this post sure has been a long one.

Tonight I am booked in for a Night Photography session walking around Athens that I was really looking forward to but I am stuffed.  As I fly out to Thessaloniki early tomorrow morning – I think I will cancel and collapse into bed.