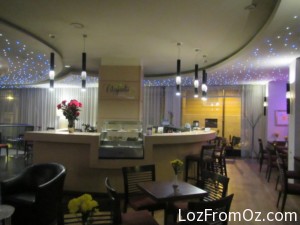 Tuesday – today an early start.  Don’t seem to be getting too many sleep ins but that’s OK. Making sure I have packed everything – I head downstairs (too early for hotel brekky) to wait for my 5.30am ride to the airport.

This is the lounge area in reception.  It is really pretty when the lights are on don’t you think? But then who normally gets up at 5am just to see the lights.

My taxi arrives and it is a nice easy journey to the airport, about 30 minutes. My driver is excited that I am going to Thessaloniki as he says most ‘tourists’ do not include that on their list.  We then discuss history, Alexander the Great and the places that I will see.  He unloads my luggage and I head for arrivals. I am on Aegean Airways flight OA 108 departing 8.50am and arriving 9.45am.

Arriving at check in I note that the demeanour of the airport staff has not changed in twenty years – they are still grumpy.

Before I left Oz, I had Lea increase my baggage allowance to 32kg on domestic flights – just in case.  Athens airport does not post the gates allocated until about 15-20 minutes before the flight so I decide to have a croissant and some strong coffee.  Ah, much better.  The gate is finally announced B7 so off I go, a short wait and then time to board my A320 – seat 5F. 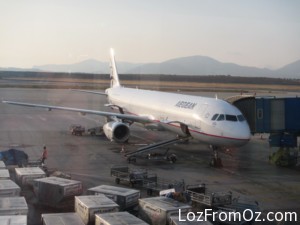 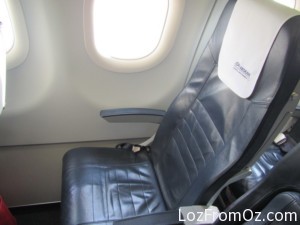 The seats are not as comfy as Emirates – but then again it is only a short flight.  BUT – the in flight snack leaves a bit to be desired.  Still – not the end of the world and we soon land in Thessaloniki. 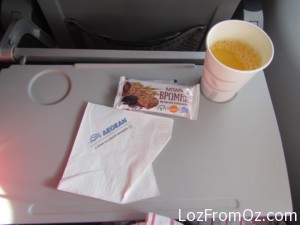 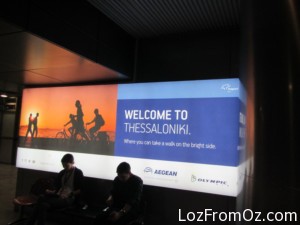 It has been raining so hope that it is not going to continue – I meet my driver and we head to the car and my hotel. But on the way – I notice this sign below..  What a hoot! I start to chuckle. 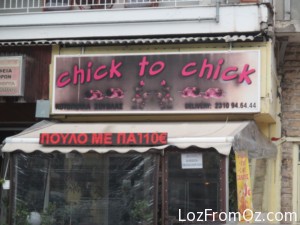 It is a pleasant drive and my driver is a real history nut.  He is excited to hear where I am going and gives me his views on history and also a few tips.

We arrive at my hotel – Electra Palace – and it is incredible – looks like a real palace.  Can’t wait to see my room, but unfortunately I cannot check in because I am too early.  Never mind – I store my bags, get out my cameras etc and then set off to explore.  I have a plan and of course I have a list of what to see and do. The hotel is practically waterfront – wow what a great place to be. 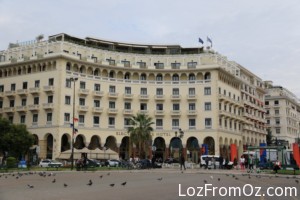 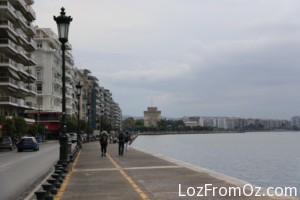 Even though it is overcast, it is great for walking.  Out the front of the hotel is Aristotle Square.

There is, of course, a statue of Aristotle,  born 384 BCE, Stagira, Chalcidice, Greece and died in 322 BCE, Chalcis, Euboea. 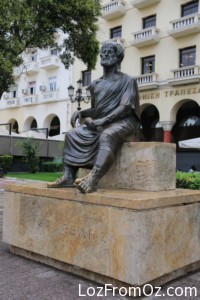 Aristotle, or Aristoteles, was an ancient Greek philosopher and scientist; he is considered one of the greatest intellectual figures of Western history. The author of a philosophical and scientific system that became the framework and vehicle for both Christian Scholasticism and medieval Islamic philosophy. Even after the intellectual revolutions of the Renaissance, the Reformation, and the Enlightenment, Aristotelian concepts remained embedded in Western thinking.

The central square of Thessaloniki is named to honour him and he appears to be holding a pergamine paper in his left hand, while his right one rests with serenity on a higher marble base.

Let’s continue walking.  My first stop will be the White Tower – about 15 minutes from the hotel.  It is a pleasant walk along the waterfront – see photo below – so refreshing.

You can even take a very touristy ride 30 minute ride around the harbour on a Trireme.  All decked out and ready for battle – I decide to give it a miss. 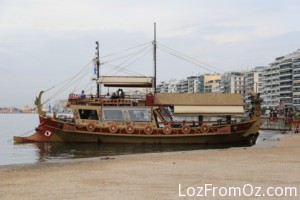 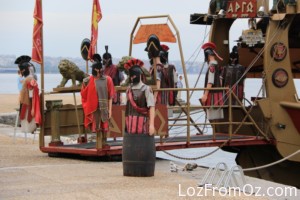 Just across the way is the White Tower.  Undeniably the most popular monument in Thessaloniki and the trademark of the city, the White Tower, located along the waterfront of Greece’s second city, stands tall. 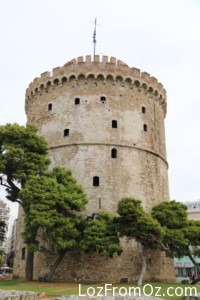 Built on top of a Byzantine fortification around the 15th century, the Tower was enclosed by defensive walls and served as a fort to strengthen the port and the coastline’s defences. At that time, it was called the Lion Tower, in honour of the Ottoman military victory, while in the 17th century, it became known as the Tower of Kalamaria.

It then housed a garrison and then a prison, taking on the name of the Tower of Blood because those condemned to death were slaughtered on the terrace and the blood stained the walls.   In 1891 it was painted white and received its current name of White Tower.

In the 20th century, the defensive walls were destroyed, while the tower served as a communication centre for the Allied forces in WWI. Many ancient artefacts were also stored inside during the conflicts.  Today, the tower is open to the public and is home to a museum focusing on Thessaloniki’s rich history and its multicultural spirit. You can also climb to the top to get some great views but I decide against climbing all those stairs.

Next up – a welcome from Alexander the Great. Photos not the best – lousy greyish sky and trying to contrast the dark grey of the statue – even with the flash – BIG FAIL!!!  But they will give you an idea.

An impressive six metres tall, it represents Alexander while riding his horse Bucephalus – one of the most famous actual horses of antiquity. 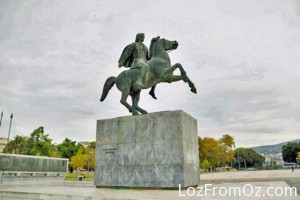 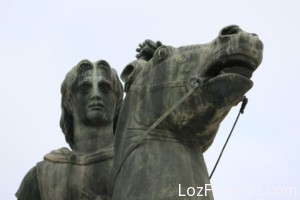 This is the monument of one of the most famous and influential personalities of all times. A person that created a legend still heard today – Alexander III otherwise known as Alexander the Great.  Born in 356 BC in Pella, Macedonia (yes I am going there) he was the son of King Phillip II of Macedon and Princess Olympiada whose origin was from Epirus. 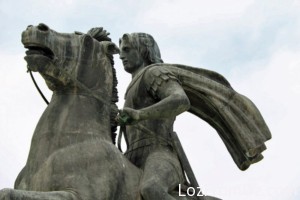 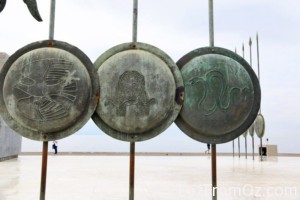 He had the privilege to be educated by Aristotle, one of the greatest philosophers of all time, Alexander inherited the throne of the Macedonian Kingdom right after his father’s assassination in 336 BC.

Time is moving on and so must I – so much still left to see – another short walk and I am at the Archeological Museum.  Reading up on this before I left – it will be a full afternoon here – so I better get a wriggle on. When I arrive I can hardly hold myself back from entering to see all that Macedonian Gold – but first – an inspection of the artefacts outside.

Below left and centre is a two sided relief pillar from the monument of the ‘Enchanted Ones’ This dates to the late 2nd or early 3rd century BC – the original is kept in The Louvre.

Left is a Dioskouroi with a horse bust next to him while in the centre is Ariadne, a companion of Dionysus – with grapes in her hair. 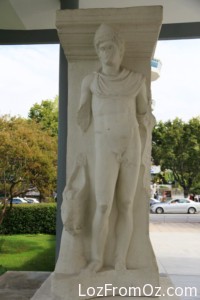 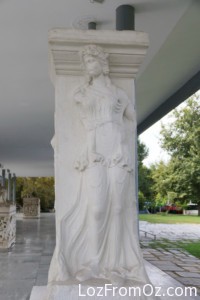 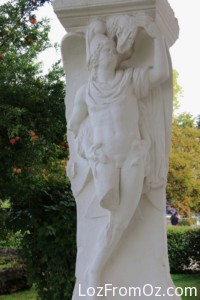 On the right is an exact copy of a another relief pillar from the  “Enchanted Ones’. Leda is depicted holding in her arms Zeus transformed into a swan.

There are also some really interesting sarcophagi – below is the work of a skilled Attic workshop that specialized in sarcophagi. The lid is in the shape of a couch, with a couple resting on top, a man and a woman. The man holds two cylinders in his left hand. 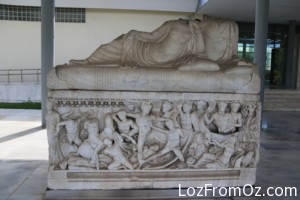 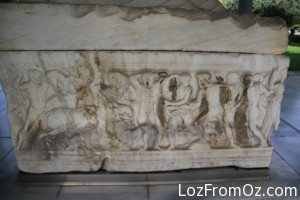 The main side of the sarcophagus is identified as the ‘battle by the ships’ between the Greeks and the Trojans.  The main figures in the centre are most probably a Trojan – Hector and Periphetes, a hero from Mycenae, who was killed by the former. High on the right edge of the scene, a seminude nymph is shown in front of a cave entrance. The marine environment under the ships depicts the waves of the sea, small fish, dolphins, an octopus and a crab. Two deities of the sea are shown in front of the ships, a seminude nereid, with a sea serpent coiling around her arm, and a bearded triton. The left part of the sarcophagus depicts the battle on the shore.  The theme on the back (photo on the right) is the hunt of the Calydonian Boar. Meleager, the son of the king of Calydon, Oineas, attacks the large boar with a hunting spear. The beast was sent by goddess Artemis, who was upset with the king of Calydon as he forgot to offer her sacrifice. The hero is accompanied by other hunters, including the Amazon, Atalante, with her dog. The short chiton leaves her right breast uncovered.

Below is another huge sarcophagus, one of the largest surviving in the entire Roman world. The lid is in the shape of a couch, with a couple resting on top. The woman holds a wreath in her hand, while the man holds a cylinder. The couch mattress is decorated by sea monsters and nereids that ride sea horses and bulls. A wide band with Eros figures and animals adorns the upper part of the larnax. 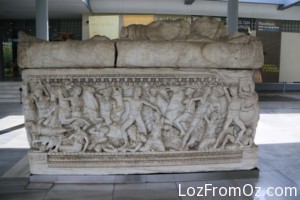 The main side depicts an intense scene of Amazonomachy (a battle between the Greeks and the Amazons) with combat on foot or on horseback. The Amazons are shown wearing short belted chitons that leave their right breasts uncovered. The helmet-wearing Greeks are nude or with a chlamys around their chest. The middle of the scene depicts Achilles preparing to strike down the kneeling queen of the Amazons, Penthesilea, grabbing her hair. According to the legend, the hero of the Trojan war fell in love with the beautiful Amazon queen, just before she drew her last breath. The battle scenes extend on all other sides of the larnax. 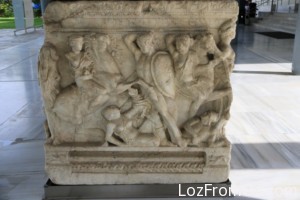 Luxurious, Attic sarcophagi with a rich relief decoration of mythological themes were sought after across the entire Mediterranean during the 2nd and 3rd century. AD. Specialists believe that the work of four skilled artists for a year was required for the construction of a single sarcophagus. You can believe that these monuments were created for a financially prosperous clientele. A small number of sarcophagi originating from the famous Attic workshops also reached Thessaloniki in the Roman Imperial era, while a local workshop of marble sarcophagi also operated in the city. 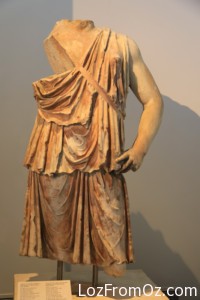 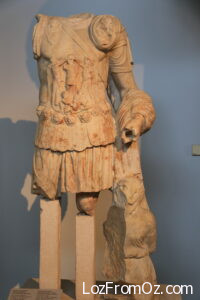 Above left is the torso from a female statue – most probably the goddess Roma 117-138 AD  Centre is a torso of an Emperor wearing a cuirass 14-68 AD.  He wears a short chiton chlamys (cloak) and cuirass (metal armour) with a gorgon and a marine group of Nereids riding seahorses and dolphins in the waves. Right is a torso 117-138 AD, most probably that of everyone’s friend – the Emperor Hadrian.

OK – this post is long enough – there will be a long post once I get inside the Museum so let’s take a break, have a drink of ouzo and maybe some dips and cheese and we will continue once refreshed.